Week 6 “Oliver and His Big bowl of Feelings” Program

Chapter 6 A big bowl of feelings.

It’s Saturday today, and that means it’s market day. Oliver loves market day as he gets to be with his dad all day selling vegetables, eggs, and sometimes smoked pork at the market in town. The only thing he doesn’t like is getting up early because the first customers usually arrive around 6 in the morning.

Oliver hears his dad’s footsteps coming closer, and then dad knocks on his door. Time to get up, Oliver. Today is market day. Come on, son, get moving, otherwise we’ll miss some of our customers. That morning, Oliver had trouble getting out of bed. The events of the past week and all the questions about the virus sometimes keep him up at night.

Mr. Silly entered Oliver’s bedroom and started pulling his sleeve, asking Oliver to play with him. Oliver finally got up to brush his teeth and get dressed, all the while playing catch with Mr. Silly. His mom made sandwiches to take with them and some fresh pineapple juice. Oliver’s dad was rushing him, and finally, around quarter to 6, they were on the road with his dad’s pickup truck loaded with vegetables and eggs. 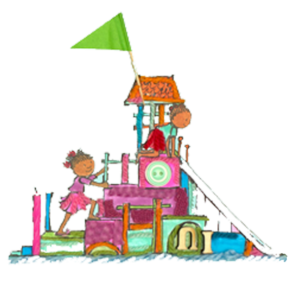 Dot Island has lots of mountains, and driving always takes time because of the narrow roads with many sharp turns. A little after 6:30, Oliver and his dad arrived at the open-air market. The customers were already lined up and started buying even before everything was unloaded from the truck. Oliver’s dad feels proud and grateful that he has so many loyal customers.

Oliver notices everyone talking at the same time, some louder than others. Usually, people talk about how prices went up, or about some exciting story they read in the newspaper. Today, however, the talk of the town was all about the virus. How dangerous it was, in which countries people were already getting sick and dying. Oliver helped his dad as much as possible and tried to listen to everyone at the same time.

He started to feel a little anxious, and he told himself he would talk to his dad again on the way home. For now, he focused on selling all their eggs and vegetables and enjoyed being with his dad. It was about 1:00 in the afternoon when the truck was empty. They’d sold out completely. Dad patted Oliver on his shoulder and told him how proud he was of Oliver for helping him. Now it was time to enjoy the sandwiches and fresh juice Oliver’s mom had made for them.

They found a small bench in the shade, and both Oliver and his dad enjoyed their homemade lunch. Oliver couldn’t help himself, he just had to talk. Dad, can I ask you a question? Of course, son, what do you want to ask me? Do you want to get some ice cream from Mr. Hutton? I know you like his homemade ice cream a lot. Here’s some change, and please bring me some as well.

Oliver nodded and let out a small sigh. Why was it so hard to talk about how he felt? While he was happy that his dad had treated him to ice cream, the virus made him nervous about what might happen. Oliver felt confused. It seemed as if all of these different feelings were in one big bowl, and it was hard to talk about them.

Once again, Oliver was determined to be courageous and talk to his dad on the way home. But now he just wanted to enjoy this Saturday at the market with his dad and, of course, his ice cream. What flavor to choose? Mango or chocolate chip? The thrill of eating this yummy treat made Oliver feel happy and pushed his thoughts of the virus far, far away. Do you like ice cream as much as Oliver does? What’s your favorite flavor?